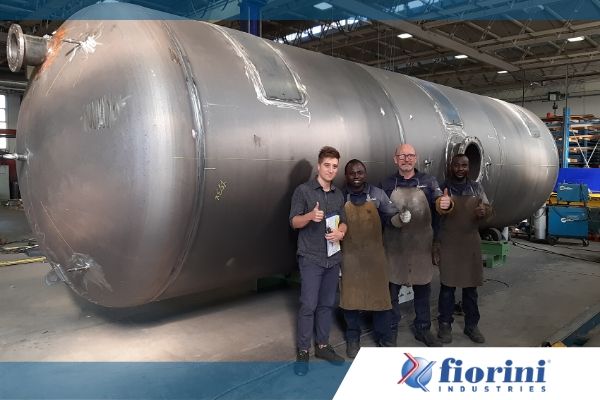 Fiorini Industries has produced the hydraulic tank which will be used as the air chamber for the Catania Aqueduct: an autoclave storage system pressurised to 10 bar with a 40,000-litre capacity.

Fiorini Industries has produced a hydraulic tank which will be used as the air chamber for the Catania Aqueduct: an autoclave storage system pressurised to 10 bar with a 40,000-litre capacity.

A large-scale project – 9 metres in length, 2.76 metres in height and 6 tons in weight – which involved a fairly long design and production stage: the manufacturing stage started with the acquisition and calendaring of metal sheets with a thickness of 10 mm each, that were used to create the three cylinder pieces on which the system is based.

The latter were joined together with submerged arc welding and then secured to the two bases using the same technique. Lastly, they were manually fitted with connections and an inspection hatch. The finished tank was subsequently sent to the testing department where it underwent a radiographic check, was filled with water and pressurised to 15 bar, to check the watertightness of all the welds.

After completion and testing and before being released on the market, the system needed approval by INAIL (Italian institute for insurance against accidents at work) in accordance with the Pressure Device Directive (better known as PED).

The project led to the manufacture of a hydraulic tank that will be used by the Catania Aqueduct to compensate for energy surges due to the motion of the water in pipes where the flow is regulated.

This means that when a pressure pipe is closed or adjusted, the air chamber, consisting of the Fiorini tank, will compensate for and reduce the water hammer effect by oscillating the volume of liquid inside the tank.

Despite the many phases of design and production that a system of this magnitude entails, Fiorini Industries has once again demonstrated the ability to successfully complete large-scale projects in line with the requirements and time frames stipulated by the customer.