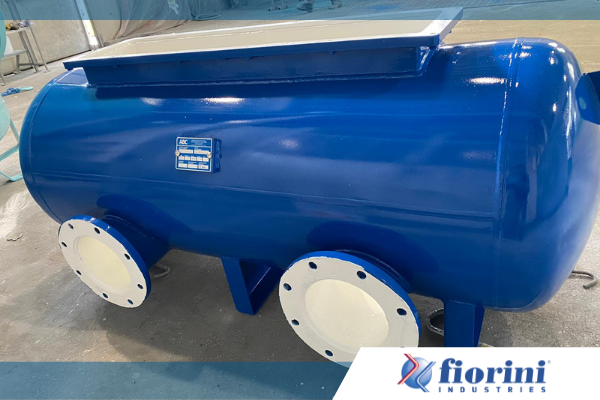 An ancillary tool to test the internal combustion engines of a famous Italian luxury car brand.

A 550-litre Fiorini tank is the instrument used to “feed” a test bench currently used by Italy’s leading luxury car manufacturer. Called a “flow bench” in industry jargon, it allows the testing of throttle bodies of internal combustion engines, reproducing the different work stages on a PC (heavy-duty, standard, and study).

The client company, an expert in bench design and assembly, requested Fiorini’s intervention after their historical partner declined the invitation to develop the component insofar as lacking the necessary skills.

The challenge was readily accepted by ABC, the Fiorini Business Unit for Industrial Technologies and Processes, which efficiently responded to the client’s initial demands and subsequent requests for changes as part of a highly demanding project, which lasted almost 6 months.

The “feed” tank in fact required several measures by Fiorini: fluid inside the clean air tank, the need to work inside the pressurised and depressurised tank (with a near absolute vacuum), the need for an absolutely empty tank without any reinforcement structures so as not to distort the work flow data, fatigue sizing according to work cycles well-defined by the internal combustion engine speed diagrams, and lastly, a rectangular flanged opening with an effective clearance of 1 metre by 22 centimetres in which to insert the throttle body assembly to be tested.

The work was carried out in two steps in accordance with our proposal and in agreement with the client. The client initially requested the design of the object and an FEM simulation (never previously used for such reduced capacities). After completing and submitting the design, the client was therefore free to decide whether to have the tank built by another competitor, however, being entirely satisfied with the professionalism and precision demonstrated by ABC during the design stage, in the end commissioned its construction to Fiorini as well.

A demanding task in terms of both identifying the design solutions, and subsequently assembling them in the machine shop, which, it must be said, turned out to be a great test bench for Fiorini!