CASE HISTORY: Rationalisation of a press cooling system: the new tank is Made in Fiorini. 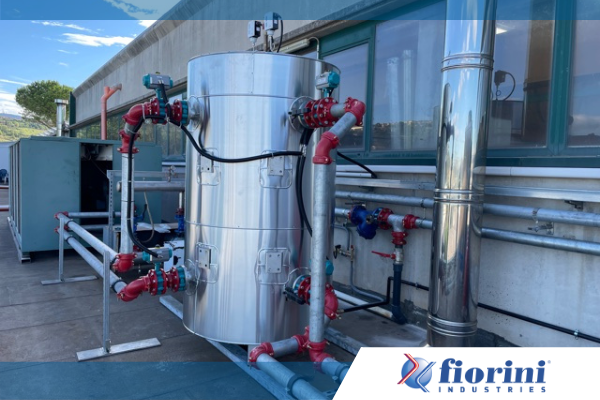 A project to meet the requirements of a plastic moulding company in record time.

Fiorini responds to the call by Feliciani, the designer in charge of solving the problem of the press cooling system operating in a facility producing parts in thermoplastic resin, based in Camerano (AN).

The system in question, an “open circuit” system, was subject to continuous oxygen infiltrations which, when combined with low working temperatures, led to deposits and corrosion (due also to the proliferation of bacteria) and damaged both the moulds and the system components.

Feliciani’s project, aimed at converting the existing system into a “closed circuit”, was based on free cooling and a chiller linked to a tank. Feliciani also decided to replace the pipe material, made of iron, so subject to corrosion, with AISI 316 stainless and galvanised steel.

Fiorini was called upon to take part in the project specifically for the tank in the new system. This was a task that required expertise, perfect timing and speed of delivery. The solution was, in fact, delivered to Feliciani in record time, thus ensuring that the company was not left without a cooling system. The hot and humid weather in August and the location of the system on the factory roof also called for the installation to be carried out as quickly as possible.

The speed of the intervention was the added value that meant that Fiorini once again made the difference.