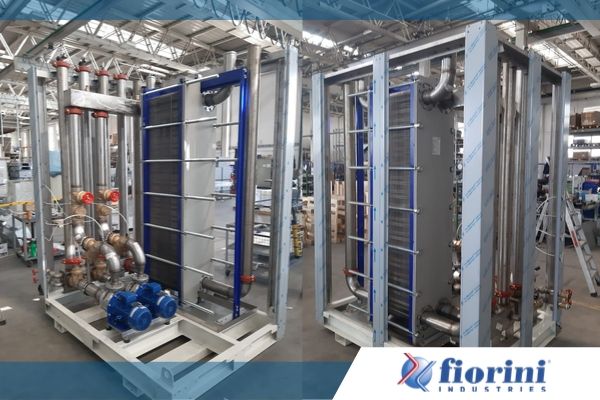 Fiorini exchangers make the difference in the wine industry as well. This time, Fiorini Industries supplied a cooling system for wine storage vats, consisting of a three-circuit heat exchanger, pumps and stainless steel pipes, in a single unit. 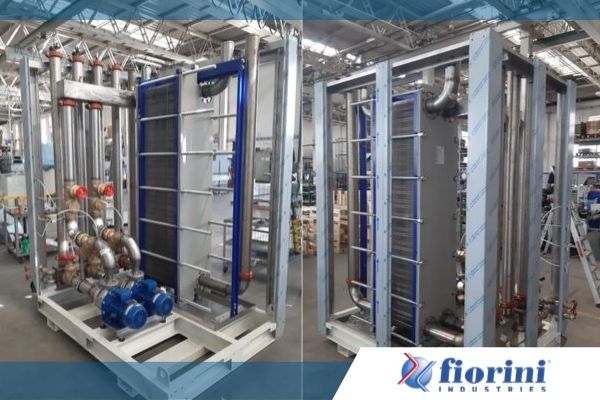 The initial problem was: how could the temperature in wine storage vats be controlled to guarantee correct fermentation? Fiorini provided the answer: by creating a customised “station” to manage the cooling fluid circulation in the spaces between the wine tanks.

This is, in fact, a special syst em which can manage the flow rates of partial loads through inverters, consisting of a 300 kW three-circuit plate heat exchanger (under nominal conditions) and a flow rate of 100 m3/h, plus a series of pumps and stainless steel pipes.

The first circuit controls the water and glycol circulation directly to the external chiller, while the second and third circuits (both with dedicated power/flow rate) are connected to two separate parts of the water cooling system. Once the exchanger had been defined, the station was completed with an electrical control panel, including an inverter, to control the on-board pump, plus stainless steel pipes and Victaulic couplings, all assembled inside a stainless steel structure suitable for installation in a corrosive environment.

An innovative system which called for all Fiorini’s know-how, starting from the experimental phase, given that the production of the three-circuit exchanger required numerous simulations and a significant design effort which led to the creation of a compact unit with the best layout for simple on-site installation.

The project has fully met the expectations and will lead to a beneficial partnership in the world of wine production: “The time spent on the design has been amply rewarded. The unit created by Fiorini Industries is sturdy, compact and extremely rational in its execution. There is no doubt that this will be an ongoing partnership,” the customer commented.

So, Fiorini has opened the doors of its headquarters in Via Zampeschi to a sector that is undergoing rapid expansion, such as that of wine cooling systems.