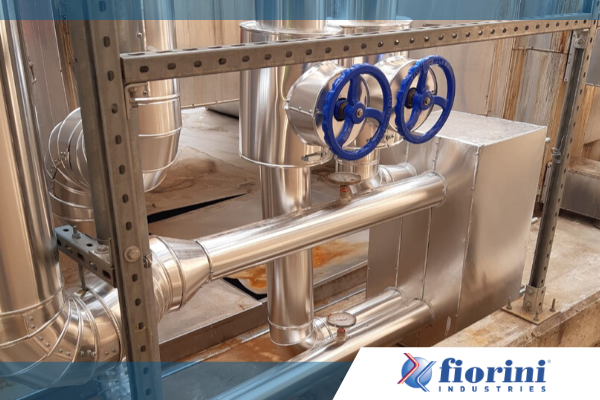 Fiorini Industries and the energy service company Renovis collaborated on an important project aimed at the sustainability of a large multinational company operating in the bakery sector.

It involved the construction of a heat recovery system contained in the ovens for the baking of biscuits and crackers in operation at the customer’s facility: the job mainly involved the fumes coming from 4 cooking ovens and the respective 40 chimneys, from which zero-cost thermal energy is recovered through a two-stage heat exchange process.

Fiorini’s contribution was relevant since the very first construction phase, given that the system designed by Renovis required the use of a heat exchanger for the transfer of thermal energy. To ensure an optimal performance of the heat exchanger, the product supplied by Fiorini was created and sized ad hoc according to precise instructions from the partner.

A gasketed plate heat exchanger F010 with 69 plates was incorporated in the system, necessary to raise from 115°C to 130°C the temperature of the water used for all the process needs of the facility (e.g. oil silo heating, diathermic oil heating, domestic hot water, etc.): the water is thus taken from the return circuit before it reaches the central heating and, after being heated, it is returned to the same circuit.

This is followed by a second stage during which the Fiorini heat exchanger heats the diathermic water up to 70°C, thus integrating the winter microclimatic needs of some production departments.

The system replaces a heating system with boilers powered entirely by natural gas, obviously very expensive. According to the data collected by the monitoring and logging system of consumption installed by Renovis, the project produced a saving of natural gas equal to 578,560 scm per year (or -30%) and a reduction in CO2 emissions of 1128 tons per year.